Daniel Beasley began his rugby league career three matches prior to the 2002 Laurie Spina Shield. He has fond memories of attending the massive North Queensland Carnival where he represented Cairns Brothers as a youngster. Last weekend, more than a decade later, a 23 year old Beasley returned as an ambassador for the Townsville & Districts Mendi Blackhawks to the same Carnival. This time he was the main attraction as the inaugural captain of the fledgling Intrust Super Cup side, posing for photos with the children and chatting with the coaches.

On Saturday 4th July Beasley will play his 50th Intrust Super Cup match when his side travels to Burleigh to take on the Burleigh Bears at Pizzey Park. If you ask him if he is excited about his milestone 50th match in the Intrust Super Cup this weekend Beasley will likely tell you the Round 17 match is not about him at all. Like every other week Beasley will be focused on leading his team by example and in his own words, “going hard up the middle.”

The prop went on to praise his team-mates for contributing to his current rich vein of form, “I’ve played with some good players over the years but I’ve never been more stoked to play alongside the quality bunch of blokes at the Blackhawks. I’m really enjoying the physicality of the Intrust Super Cup and it’s great to reach a milestone like 50 games.” He said.

“I’m really happy with how we are travelling but the focus from here must be on building a platform to play from when the finals come around.”

Beasley has been in outstanding form so far this season. He has consistently found himself in the top three tackle count and, along with the rest of Townsville Mendi Blackhawks heavy hitting engine room, Beasley has led his side to the top of the Intrust Super Cup table after 16 rounds. His form was rewarded in May when he was selected at starting prop for the victorious Queensland Residents’ side.

Beasley returned to Townsville in late 2014 to sign with the Mendi Blackhawks after spending 2013 and 2014 playing Intrust Super Cup for the Norths Devils and Mackay Cutters. One of the attractions of returning was surely to play under his previous coach Kristian Woolf, under whom Beasley played two seasons of Under 20’s for the North Queensland Cowboys; including the NRL Under 20’s Grand Final loss in 2011. 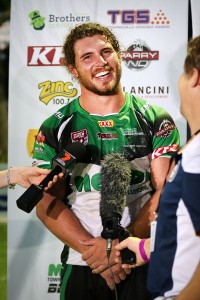 Coach Woolf praised Beasley’s on and off field efforts leading into his milestone game, “Daniel has made an exceptional contribution to our young club so far. He has led from the front off the field in helping to develop a training ethic and club culture that will lay the foundations for long term success at the Blackhawks.” He said.

“He has also led from the front on the field with his aggressive style of play combine with a heavy workload. He deserves credit for reaching the 50th game milestone and will certainly lead our club into many more games in the future.”

This week the Mendi Blackhawks welcome back Kyle Feldt returning from injury but will be without Rob Lui and Glenn Hall. Tom Humble will return to the halves to partner Michael Parker-Walshe and Kelepi Tanginoa will start in place of Hall in the second row. The side will face a Bears side who will be looking to bounce back after a 24-2 loss to the Easts Tigers. Burleigh currently sit on 18 points just outside the top five locked with the Northern Pride and Mackay Cutters on the same points but relegated to 8th place due to for and against. 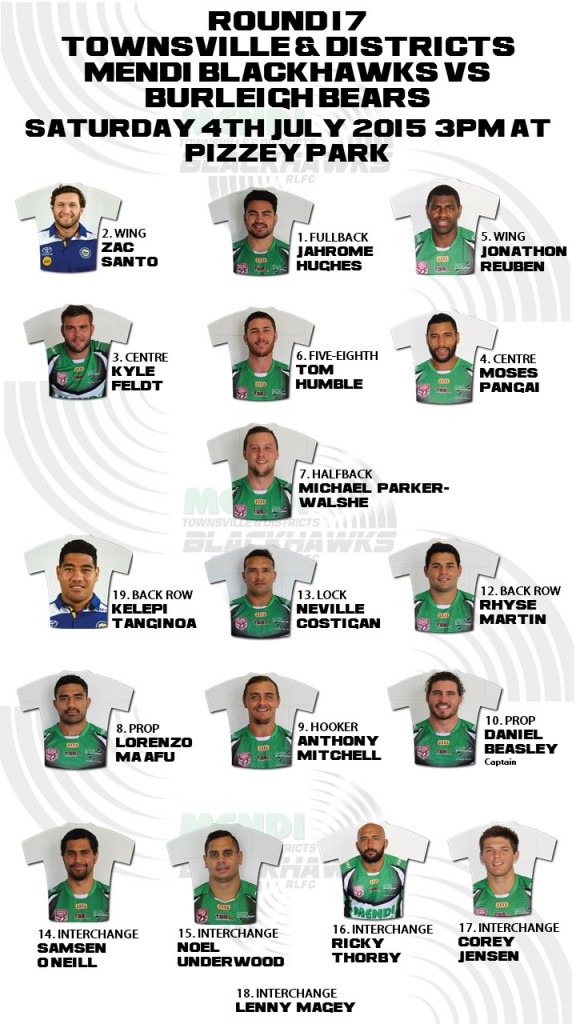