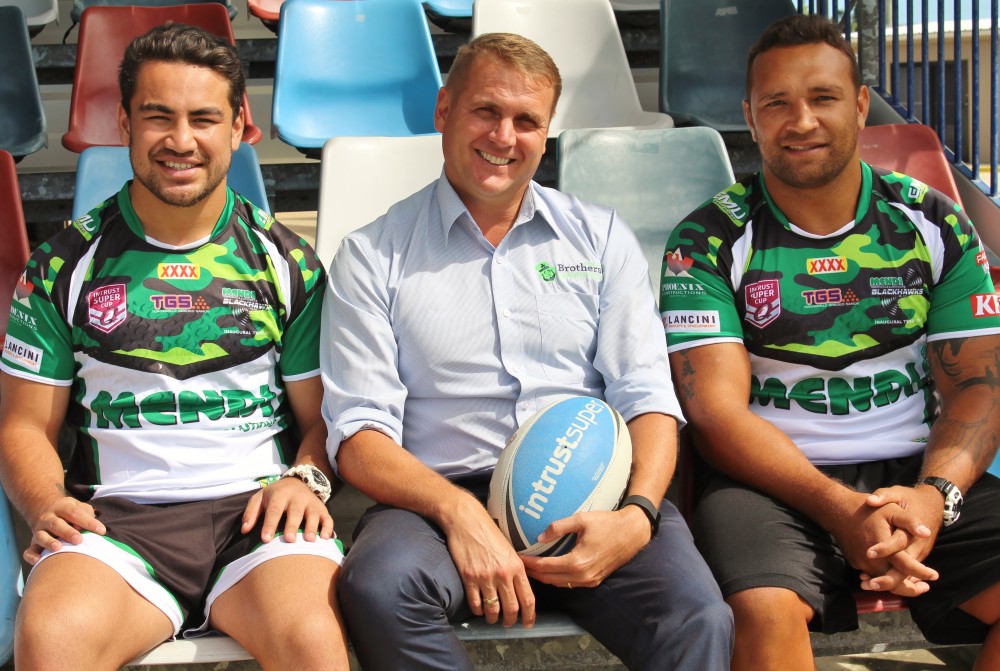 Jahrome Hughes, CEO Justin Wilkins and Neville Costigan. The players are modelling the special camouflage jerseys they will wear at this weekend’s Anzac Day match against the East Tigers

With a logo that incorporates the expansive blades of the Black Hawk aircraft in motion and colours of green and black it is clear that the newest club in the Intrust Super Cup have a genuine connection to the defence force. In fact the club’s name was chosen on the basis that it strongly reflects Townsville’s support and dedication to the defence force and recognises Townsville’s history as one of the biggest Black Hawk defence bases in Australia.

Whilst the Army may have marked the end of the 25 year S-70A-9 Black Hawk operation in Townsville in 2014, the Townsville & Districts Mendi Blackhawks continue to endeavor to keep the aircraft and its decorated history alive in the hearts and minds of people in the North Queensland region.

On Anzac Day 2015 the Townsville & Districts Mendi Blackhawks will have the honour of hosting an Anzac Day Home Game at Jack Manksi Oval. The year 2015 is the 100 year anniversary of first major military action fought by Australian and New Zealand forces during the First World War. The Mendi Blackhawks have planned Anzac Day Commemorations to pay respects to and acknowledge those Australian and New Zealand service men and women who have lost their lives in war over the past 100 years.

The club has planned, with the help of the 5th Aviation Regiment, to host a commemorative ceremony prior to kick-off of the Intrust Super Cup Match between the Mendi Blackhawks and the Easts Tigers. The players will also take to the field in their special camouflage jerseys to mark the occasion. Emerging country music star and Townsville product Jade Holland will perform the National Anthem following the Anzac Day commemorations. The internationally award-winning artist has firsthand experience on the front line, having travelled to the Middle East to perform for Aussie troops in 2014, and is looking forward to being a part of the Anzac Day celebrations for the Townsville & Districts Mendi Blackhawks.

Football Operations Manager Adrian Thomson explained what a great honour it was for the club to host this very special Home Game “Townsville is a garrison city and our club shares a very close association with the defence force. It’s a massive honour to be able to host a game day on such an important and historic day for our nation.”

“We look forward to people coming to the game following the Dawn Service and Parades around town. We hope to cap off a special day of remembrance with a celebration of football between the two top teams at present in the Intrust Super Cup and also local Townsville & Districts Rugby League action.”

The Anzac Day home game will also be the first opportunity for the local Townsville & Districts Rugby League clubs to be showcased in the preliminary matches leading up to the Intrust Super Cup clash. Local clubs Brothers and Herbert River will face off in four grades starting with Under 18’s and Under 20’s on Fields 1 and 2 kicking off at midday. The Reserve Grade game will kick off at 1:30pm on field 1 and the A Grade game will follow at 3pm. Anzac commemorations will begin after 4:30pm and the main game between the Mendi Blackhawks and the Easts Tigers will follow at 5pm.

“This is the first of our four home games where we will exhibit local league clubs as a part of our game days. Four clubs have generously offered to host their own game days as a part of our preliminary games for the Mendi Blackhawks. These clubs are Brothers, University, Charters Towers and Centrals.” Thomson said.

“We are very grateful for the support of the local league and hope to see a huge crowd at Jack Manski Oval to see all of the local talent as well as our Mendi Blackhawks taking on Easts.”

GET YOUR TICKETS NOW!

No food or drinks to be brought into the venue.

Code of Behaviour for venue. For information about the venue Click Here 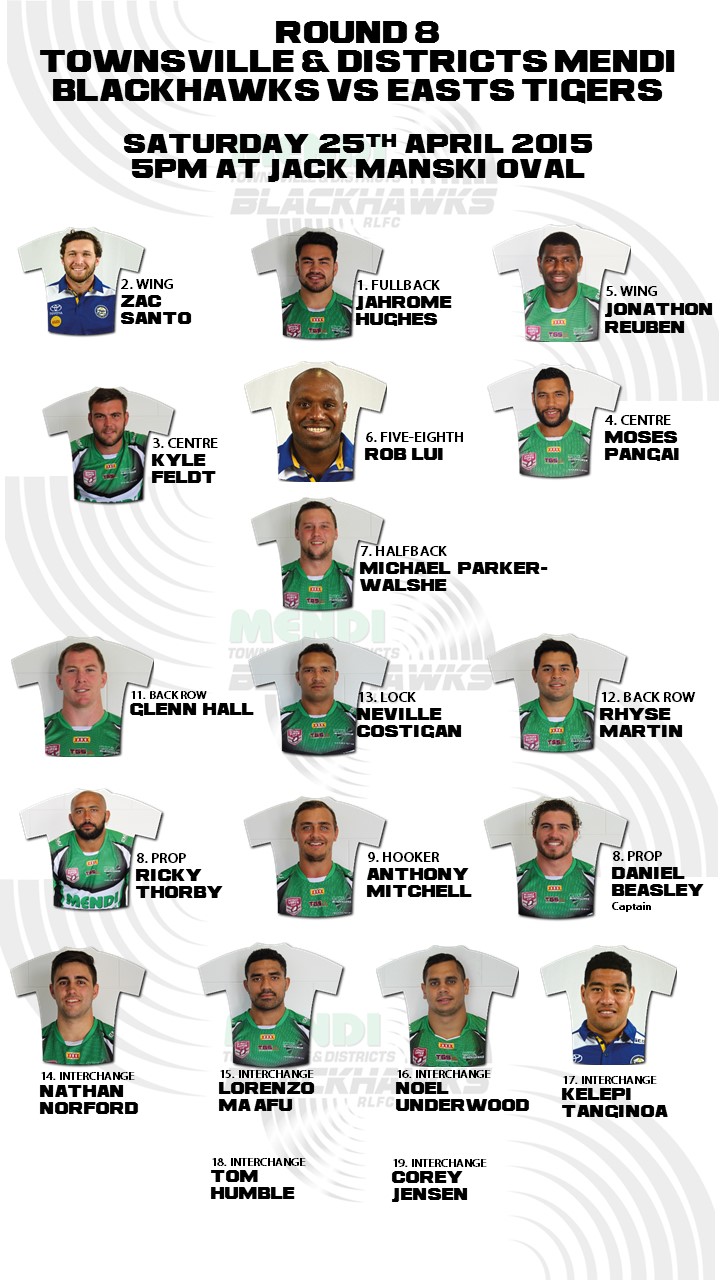