Despite currently sitting at the top of the Intrust Super Cup Ladder the Townsville & Districts Mendi Blackhawks are under no illusion about how tough and open the competition is in Season 2015. After three rounds of Intrust Super Cup there is not one team who remain undefeated, which provides some insight into the unpredictable nature of the competition.

The Mendi Blackhawks have this week named an unchanged line up from their Round 3 win over the Northern Pride at Barlow Park in Cairns. Coach Kristian Woolf has shown faith in the squad who ran in ten tries to 2 against the reigning Intrust Super Cup Premiers and National Champions.

“Having the same team allows us to develop some consistency and build on last week’s performance. Continuity is always a positive thing for a football side, especially a new side such as ours. It allows the players to get comfortable both in their own roles and with their combinations.” Coach Woolf said.

This weekend’s game against the CQ Capras will be the first match up for the two sides after the pre-season trial in Rockhampton was cancelled due to a cyclone. Led by former NRL player Jason Hetherington as coach, the Capras boast players with NRL experience such as Russel Aiken and Matt Minto, as well as Intrust Super Cup flyer Javarn White. Main game kick off is at 5pm with preliminary games set to be Townsville Stingers and CQ Capras in both the Under 16 Cyril Connell Cup at 12pm and Under 18 Mal Meninga Cup at 1:30pm. The NQ Cowboys NYC team will also take on the Melbourne Storm at 3pm just prior to the Intrust Super Cup match. Gates will open at 11:45am.

Tickets are available both in person from Brothers Leagues Club Reception and also online. 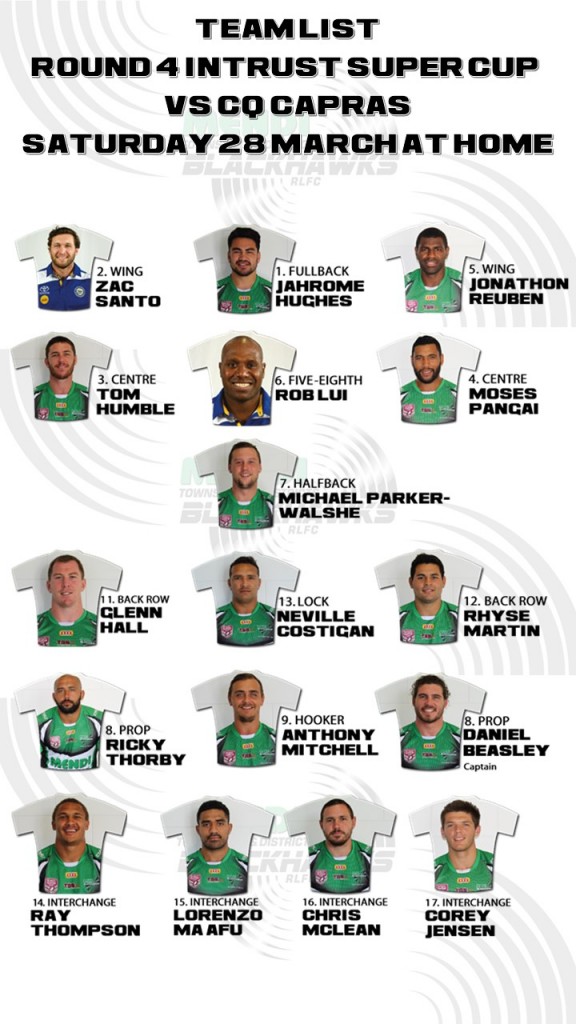