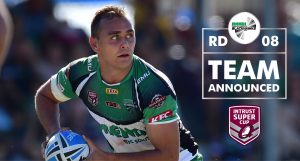 The Townsville Mendi Blackhawks have named their team for the Round 8 Intrust Super Cup, ANZAC Round to take on Tweed Heads this Sunday.

Coach Kristian Woolf has named Sione Lousi on the bench who will make his return after breaking his arm in round 1.

“We are all looking forward to having Sione back on the field,” Woolf said.

“He has a wonderful work ethic, combined with his size and skills, he will be a really good inclusion for us this week.”

Woolf is also expecting a tough game against the Seagulls who are coming off a win against the Norths Devils.

“We need to be more consistent this week and have addressed this at training.”

“Tweed are a good side, our forwards will need to be ready for a tough battle.”

Round 8 is the ANZAC Round in the Intrust Super Cup and the Townsville Mendi Blackhawks will be paying their respects with a full ANZAC Ceremony prior to kick off.

“ANZAC Day means a lot to us,” Woolf said.

“We are a Garrison town and have two former serving staff members on our team that the boys really look up to.”

“The entire Mendi Blackhawks team will be paying their respects.”